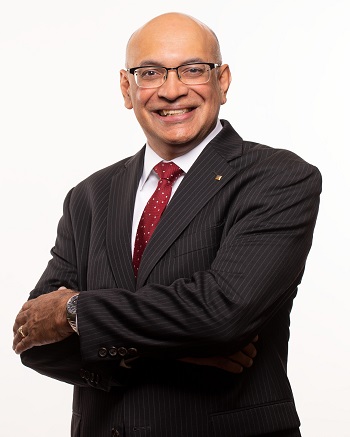 Sanjay Raman (S'84–M'98–SM'06-F'12) received the B.S. degree (with highest honor) from the Georgia Institute of Technology, Atlanta, in 1987, and the M.S. and Ph.D. degrees from The University of Michigan at Ann Arbor, in 1993 and 1998 respectively, all in electrical engineering. He is currently serving as Dean of Engineering at the University of Massachusetts, Amherst, where he is also a Professor of Electrical and Computer Engineering. From 1987 to 1992, he was a Nuclear Trained Submarine Officer with the U.S. Navy. In January 1998, he joined the faculty of the Bradley Department of Electrical and Computer Engineering, Virginia Polytechnic Institute and State University, Blacksburg and Arlington, VA. He also served as Associate Vice President, Virginia Tech National Capital Region, and as the President and CEO of the Virginia Tech Applied Research Corporation. He is also a founding member of the VT Multifunctional Integrated Circuits and Systems (MICS) research group. His research interests include RF/microwave/millimeter-wave integrated circuits and antennas, high-speed/mixed-signal ICs, interconnects and packaging, RF microelectromechanical/nanoelectromechanical (MEMS/NEMS) devices, and integrated wireless communications and sensor microsystems. From 2007-2013 he served as a Program Manager with the Microsystems Technology Office, Defense Advanced Research Projects Agency (DARPA), Arlington, VA, responsible for major R&D programs in the areas of high-speed electronics, adaptive RF/mixed-signal integrated circuits, RF MEMS, and 3D/heterogeneous integration technologies.

Dr. Raman has served as an associate editor for the IEEE TRANSACTIONS ON MICROWAVE THEORY AND TECHNIQUES, and on the Technical Program Committee of the IEEE Radio Frequency Integrated Circuits Symposium. He served as Technical Program Co-Chair for the 2014 International Microwave Symposium. He was an Elected Member of the IEEE Microwave Theory and Techniques Society (MTT-S) Administrative Committee 2015-2020.He was the recipient of the 2007 Virginia Tech College of Engineering Faculty Fellow, the 2000 Presidential Early Career Award for Scientists and Engineers (PECASE) (1999 NSF CAREER Award), the Virginia Tech College of Engineering Outstanding New Assistant Professor Award (2000), and a 1996–1997 Armed Forces Communications and Electronics Association (AFCEA) Postgraduate Fellowship. In 2013 he was awarded the Secretary of Defense Medal for Exceptional Public Service for his service at DARPA. He is an elected Fellow of the IEEE.